Charming Rome: the 5 most famous piazzas & Things to do 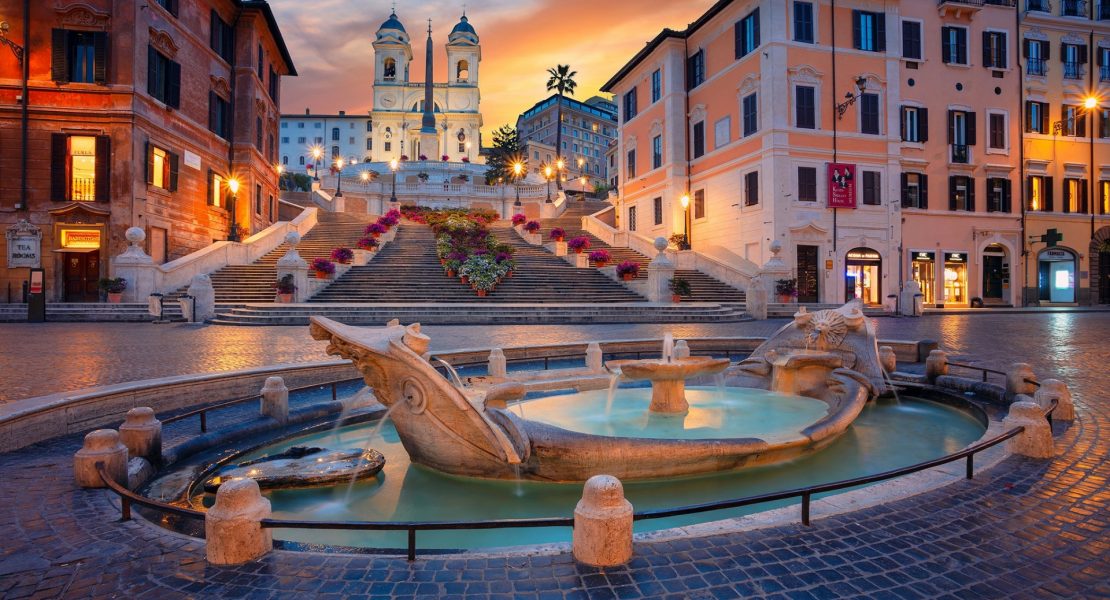 Are you planning your trip to Rome? Besides preparing your luggage, you often find yourself thinking and searching like crazy on the internet about the places you are going to visit. Don’t lose your time anymore, as we have already made you the desirable list!

Well, first here you are with:

Combining sightseeing with coffee and food… it sounds super! 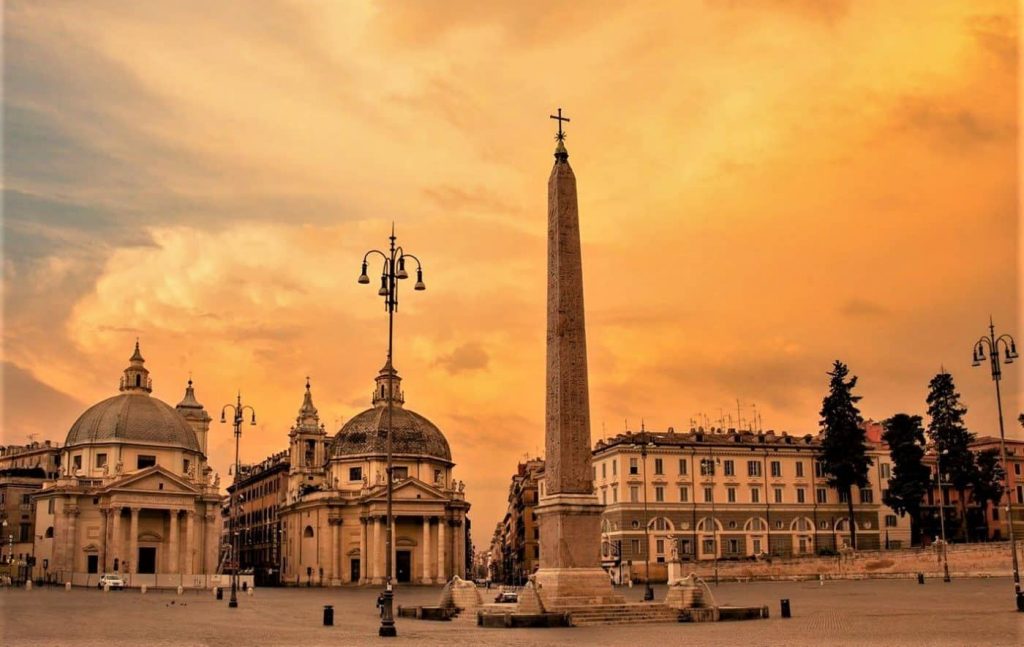 The large urban square in Rome which means “People’s Square”, was once the Porta Flaminia of Ancient Rome, which is to say the oldest entrance to the city and a place of public executions until 1826. The layout of the piazza was designed in the neoclassical style between 1811 and 1822 by the architect Giuseppe Valadier. The piazza stands out for Tridente, the three main streets of Rome ending here – Via del Babuino, Via Ripetta and Via del Corso. You can also admire the church of Santa Maria del Populo, (where Nero, it is said that had been buried in its foundations) the “twin” churches of the Virgin Mary, the Egyptian obelisk of Ramses II, which dominates the center of the piazza, as well as the beautiful elaborate Fontane.

Selfie TIP: Of course we want to take a picture! So the best spot to take pictures is to go to the uphill steps leading to Villa Borghese that offer you a magical spherical view of the square. 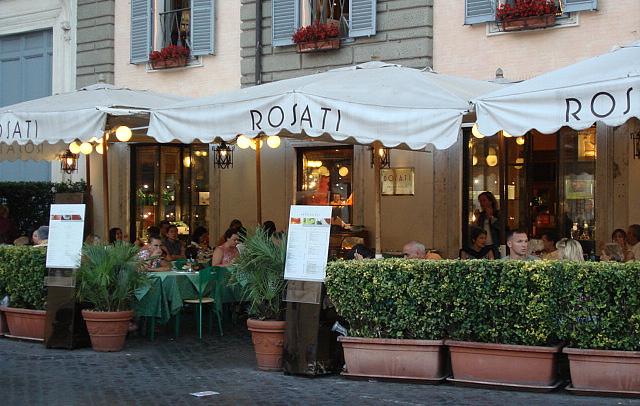 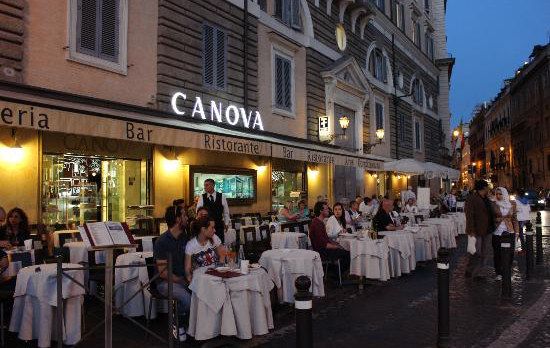 Moreover, Stravinskij Bar at the Hotel de Russie (Via del Babuino, +39 06328881 ) is an absolutely romantic option for cocktails on warm summer nights. So after having your coffee at the touristy Canova, just walk a few steps down Via del Babuino enjoying signature cocktails among an eclectic crowd with Hollywood stars, celebs and wealthy hotel guests in a cosmopolitan atmosphere. 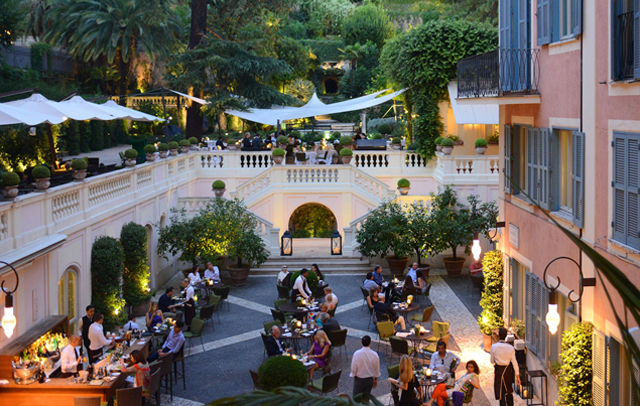 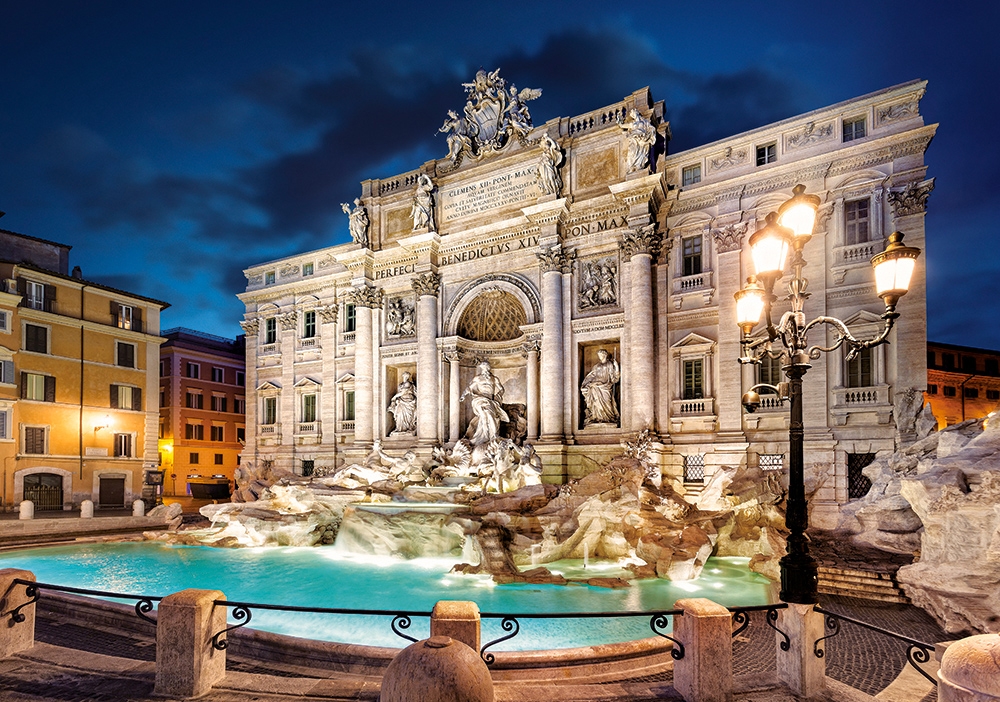 You can’t go to Rome without visiting the imposing Fontana di Trevi, the attraction of thousands of tourists that are used to throw a coin to come back to Rome sometime in the future! The largest Baroque fountain in the city and one of the most famous fountains in the world is located in the piazza di Trevi with the main figure of Oceanus.  It was designed by Italian architect Nicola Salvi and finished by Pannini, in 1762.

Enjoy music and drinks with the panoramic view of the magical Fontana di Trevi on the third floor of the Relais Fontana Di Trevi Hotel where the sophisticated lounge bar is located (Via del Lavatore 44, +39 066797317). 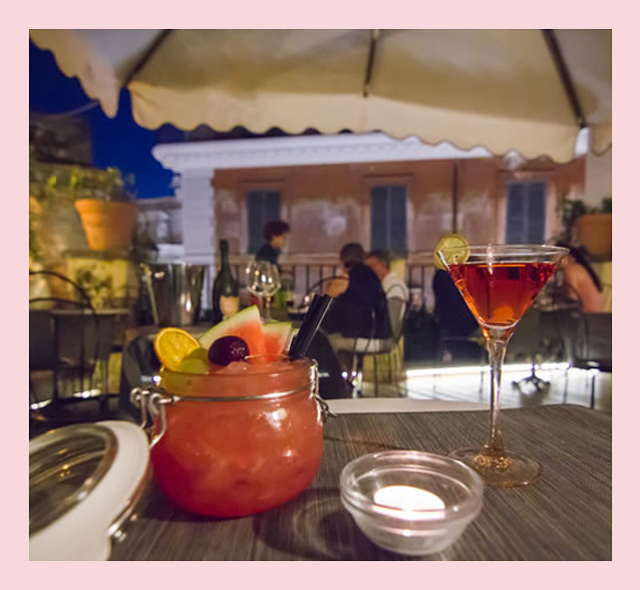 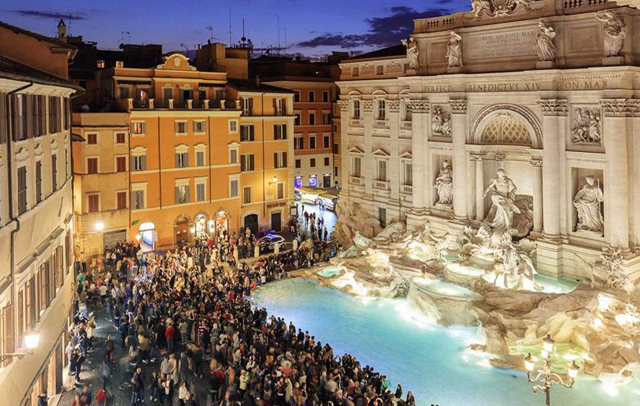 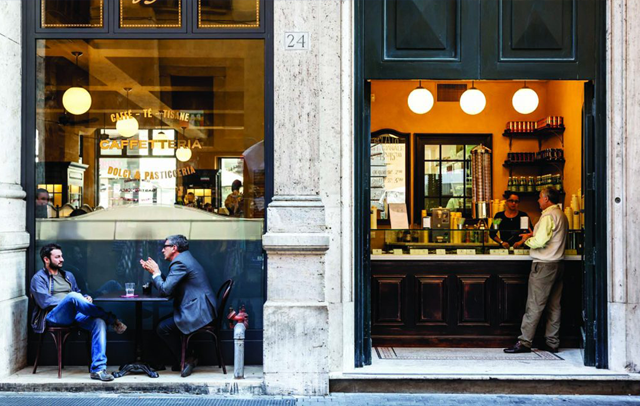 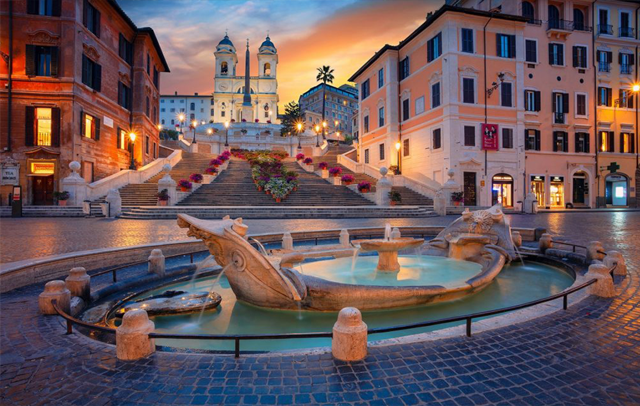 One of the most famous and multinational squares in Rome is Piazza di Spagna, at the bottom of the Spanish steps, which owes its name to the Palazzo di Spagna, the seat of the Embassy of Spain. Being different from the other squares is also distinct for the cosmopolitan air thanks to the famous high fashion houses that you can find on Via Condotti.

In the middle of the square is the famous Fontana Della Barcaccia, dating to the beginning of the Baroque period and sculpted by Bernini (1620). It is about the characteristic flooded boat that full of holes drips water at low pressure. The imposing 135-step staircase, which leads to the church Trinita Dei Monti, is crowded all day long with tourists from all around the globe. It’s a chance to grab a slice of pizza or ice cream and enjoy it sitting on the steps and gazing down the piazza and the human traffic before strolling around on via Condotti. It is worth!

Otherwise, you can visit one of the most historic and legendary cafés in Rome, the Café Greco (Via Dei Condotti, 86, +39 066791700), named after its Greek owner, who opened it in 1760. It is remarkable to say that many famous and intellectuals, painters, sculptors and songwriters from all over Europe used to go there throughout the 18th century.  Monarchs were also among them, such as King Louis I of Bavaria and popes. 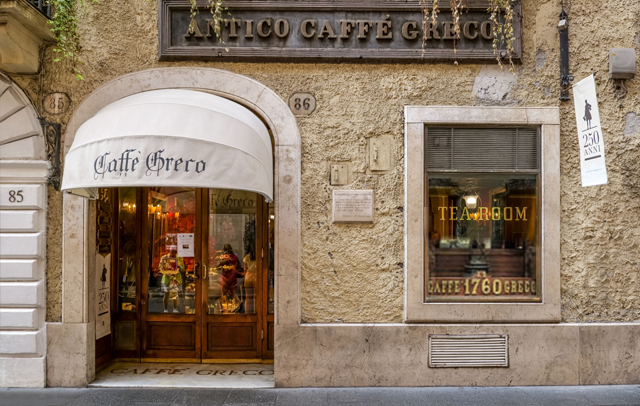 Selfie Tip: The best spot for a pic is undoubtedly in front of the fountain with the Spanish steps as a background! 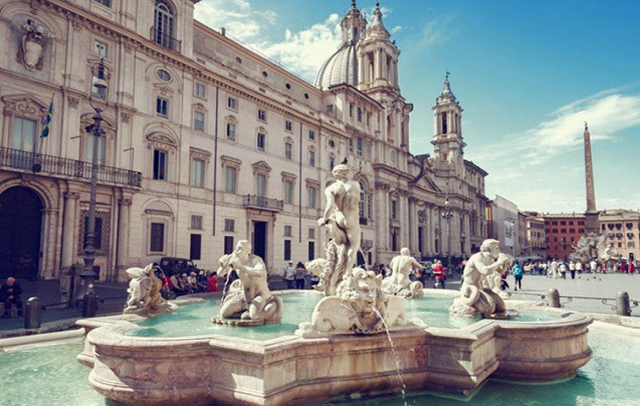 One of the most photographed and romantic square for strolling is undoubtedly Piazza Navona, where it is built on the site of the Stadium of Domitian (86 A.D.), following the form of the open space of the stadium. Its arena was larger than the Colosseum while sports games were held there.

The famous Fontana Dei Quattro Fiumi or Fountain of the Four Rivers with the Egyptian Obelisk (1651) by  Bernini stands in the center, symbolizing La Plata, Ganges, Danube, and Nile. The square is also decorated by other two elegant fountains with the night lightening to make the piazza soooo atmospheric.

So after your walk and almost just 8 minutes walking distance from Piazza Navona trust “Salotto 42” (Piazza dei Pietra, 42, +39 066785804) and enjoy your aperitif, or delicious cocktails, finger food and music with a view of the Temple of Hadrian. It is ranked as one of the world’s best bars so take the chance to visit it and being mingled with an upscale ambiance in the evenings or the later afternoons.

Tip: Piazza Navona hosts a variety of interesting events almost every day, from outdoor exhibitions, jugglers, mini book exhibitions, bazaars and so on. 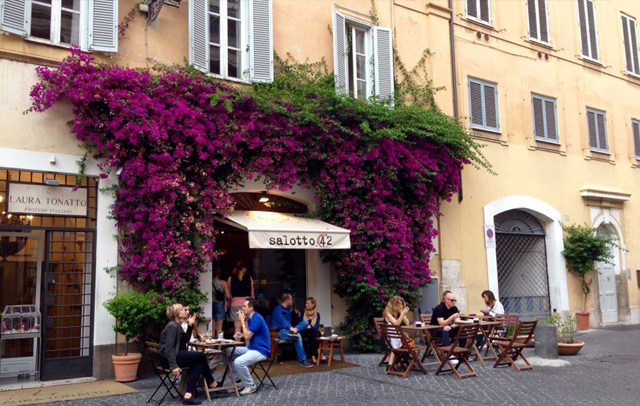 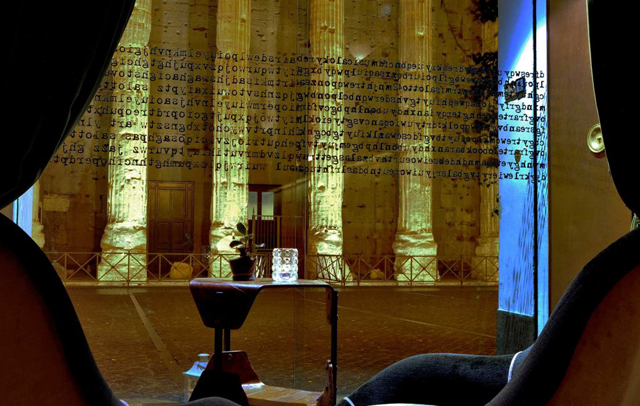 You can also go for the delicious dessert tartuffo in the historic Bar Tre Scalini (since 1815), staying in Piazza Navona (Piazza Navona, 30 -35, +39 066879148). If you take it takeaway is cheaper (half price) and is also a chance for more strolling and selfies. 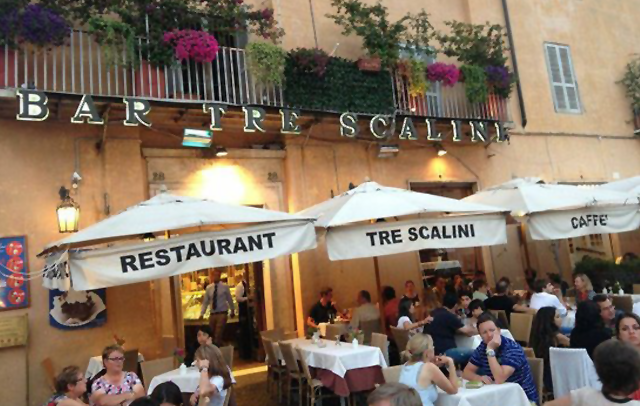 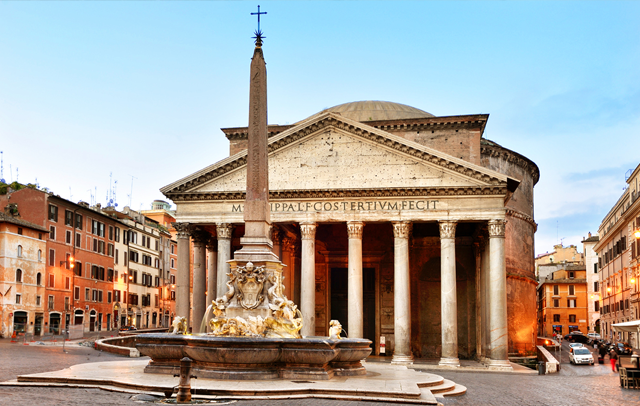 The small square, where Pantheon is located, got the name from the Pantheon’s informal title as the church of Santa Maria Rotonda. In the center of the piazza, there is a fountain, the Fontana del Pantheon, constructed in 1575 and surmounted by an Egyptian obelisk, which was added to it in 1711.

For the record, the classic masterpiece of the 2nd century AD, Pantheon, with its vaulted ceiling, was the first pagan temple converted into a church. The entrance is free and you can admire tombs of great Italians, such as that of the painter Raffaello among the others. If you are looking for a place to rest and gaze at Pantheon, there are many touristic cafes with tables out on the perimeter of the square.

For coffee lovers: If you want to taste the authentic Italian espresso, visit the famous La Casa Del Caffé Tazza d’ Oro (Golden Cup) (since 1946). You can also buy some coffee for home from rare blends as well as special gifts for your beloved ones (Via Degli Orfani, +39 066789792). Taste granita di Caffe, it’s about a heavenly cup! 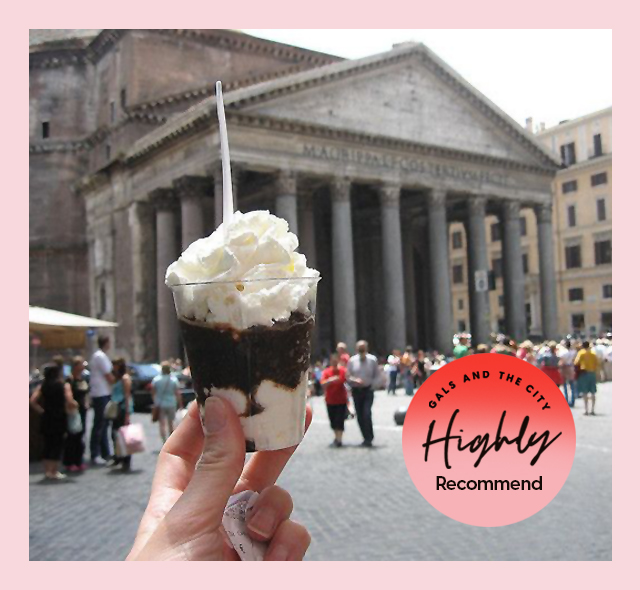 Mykonos: A dip in the Blue-White of... 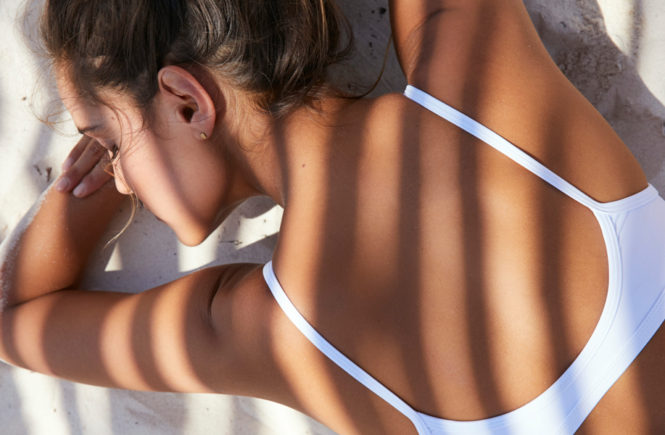 The Absolute DIY After Sun Lotion For... 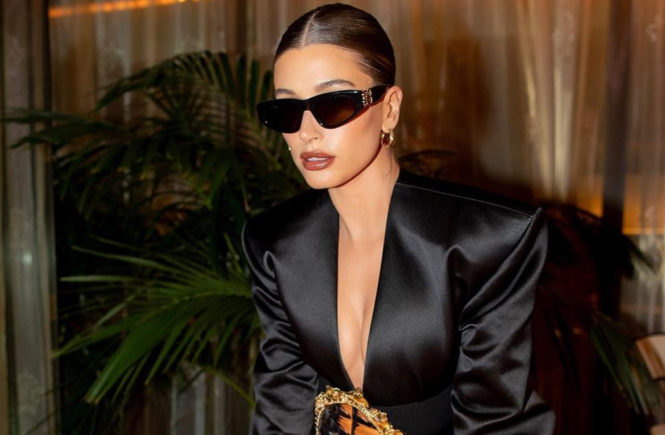